A broken key in the wrong circumstance, such as a vacation or traveling in a remote area, could turn what would normally be a minor inconvenience into a catastrophe. If the key breaks off in the ignition, having a spare will not help in this situation. It is better to take steps to do what you can to prevent this scenario in the first place. How to do that starts with an understanding of how keys and locks work.

There are two main types of locks: the pin and tumbler and the wafer tumbler. The wafer tumbler is the oldest technology and less likely to be used on vehicles, but may still be found on the door locks of older vehicles. 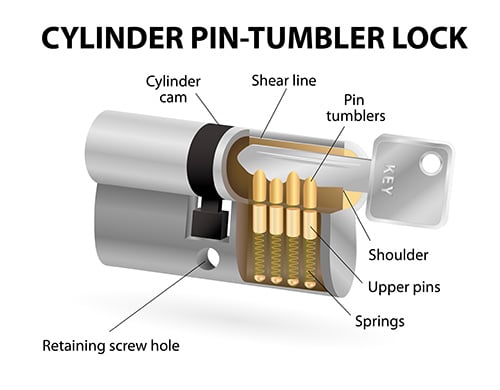 The wafer tumbler lock is an older type of lock that operates with wafers within a core. The wafers protrude from the core at the top and the bottom preventing rotation in the locked state and retract in an unlocked state.

The notches and grooves on keys are called the key bitting. The key bitting creates the right conditions for the internal lock mechanism to rotate freely.

The bitting on the correct key for a pin and tumbler lock pushes the driver pins and key pins into position to line up with the shear line, which allows the plug to rotate freely and puts the lock into an unlocked state.

When the wrong key is inserted, the driver pins and key pins do not line up with the shear line and the plug remains restricted.

The bitting on the correct key for a wafer lock pushes the wafers into a position that is flush with the core on the top and bottom so that the core is free to turn.

When the incorrect key is inserted into the lock, the wafers protrude on the top and bottom and the core is restricted.

How Keys are Cut

Keys are cut so that the depth of each notch or groove in the bitting matches the depth needed to put the lock into the unlock state. Keys are made up of a bow, shoulder, cuts, and a tip. 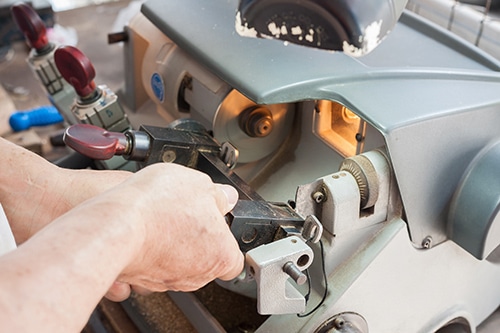 Some standard keys have codes that determine the depth of each cut in the key bitting. For these keys, a locksmith does not need the original key and can use the code to cut the correct key.

When a very deep “V” cut is made, there is not enough material to make an adjacent shallow cut. Because of this, keys typically do not have deep cuts adjacent to shallow cuts. Many keys have shallow cuts closer to the shoulder to give the key more integrity with deeper cuts found in the middle.

Deep cuts, especially on double-sided keys, can weaken the key by removing too much material making it more prone to breaking. If your original key has super deep cuts, a locksmith can rekey the lock to fit a new key that does not have any super deep cuts.

Can Broken Keys be Repaired?

A repaired key will never be as strong as a key that has never been broken. The repaired key is at great risk of breaking off inside the lock. For this reason, locksmiths do not recommend repairing a broken key. The cost of replacing the broken key is much less than the cost of a mobile locksmith service called out to remove a key that has broken off in the ignition. Locksmiths can usually successfully cut a new key based on the bitting of a broken key.

If the key fob of a car key is broken, a locksmith can remove the key and replace the broken fob or repair the broken key fob shell. Locksmiths can also make new transponder keys if yours is broken or just worn out from years of use. 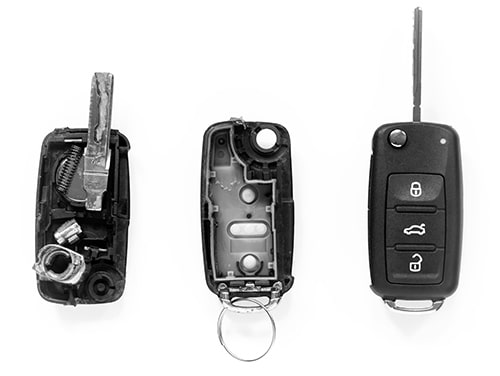 How Damaged is Too Damaged?

Many keys today are made from nickel silver, which makes them easier to cut but also makes them weaker over time. Here’s how to tell if your key is too damaged to use or repair.

Broken or Split in two

Never try and glue a key that has broken in half. The glue will not hold and the lower half of the key will likely break off and get stuck inside the lock. 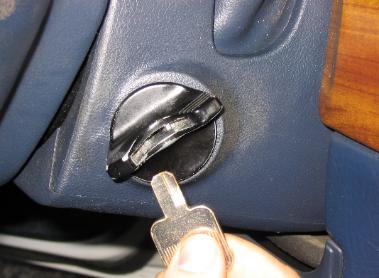 If a key is cracked but not completely broken, you should replace it with a new key to prevent it from breaking off in the lock.

If a key bends, this is a sign of weakened metal. Not only is there a risk of breaking the key while attempting to straighten it, but also the key is more at risk of breaking during regular usage. Replace a bent key with a newly-cut key.

A twisted key is also a sign of weakened metal. You should replace a twisted key rather than repair it.

If pieces are missing, being able to use the key depends on which piece is missing. If part of the bow is missing but there is enough of the shoulder and bow to grip the key, having a piece missing shouldn’t affect the function of the key. If the shoulder is also missing, you will likely push the key in too far into the plug and risk getting it stuck or even damaging the lock.

Over time, older keys can wear when used often, causing the grooves on the bitting to no longer have enough precision to unlock the lock. Although an experienced locksmith can usually cut a workable key based on a worn key, it is usually a better idea to simply rekey the lock to a new key. To prevent this scenario, store original keys and only use copies for regular use unless you have a coded key.

Call a Locksmith for Help with Broken Keys

If you see signs that your key is weakened and at a greater risk of breaking, replace it before it breaks. For help with broken keys, lock rekeying, and all of your locksmith needs, visit 1-800-Unlocks. Make sure to use a licensed, insured, local, family-owned business to ensure quality, trustworthy service.

Hiring locally ensures that the company’s license and insurance cover the work done in your area. You can search 1-800-Unlocks with your zip code to find a local residential or commercial locksmith. Research the company to make sure you do not fall victim to a locksmith scam. Family-owned businesses with multiple references and many years of satisfied customers provide the security and confidence you need, whether you are facing a minor inconvenience or need immediate help. Visit 1-800-Unlocks today.

I am a licensed locksmith and the owner of 1-800-Unlocks. The goal of our locksmith directory is to provide a safe place for customers to find a local legitimate locksmith and avoid the pitfalls of being a victim of scamming locksmiths.

Find awesome listings near you!